Amarbayasgalant Monastery, whose name means ”monastery of the quiet felicity”, is located near the Selenge River, at the foot of Mount Burenkhan. It’s one of the three largest monasteries of Mongolia. The Manchu emperor Enkh Amgalan Khan built the monastery in the 18th century, in memory of the first Bogd Gegeen, Zanabazar, in order to keep and preserve his mortal remains. The construction began in 1727 and completed in 1737. 1200 langs (= 3730 kilograms or 8223 pounds) of silver coming from the state coffers were used to build this sumptuous monastery. The emperor personally wrote in four languages (Mongolian, Tibetan, Manchu and Chinese) a message symbolizing his protection and his control. This was written on a sign suspended in the entrance of the main temple. It’s one of the rare monasteries that have partly avoided the destruction of 1937 by the Soviets. The buildings of the main part were spared and the thangkas, the statues and the manuscripts were looted. All the lamas in charge of the place were executed and the monastery has been neglected for 50 years. Since 1998, the lamas have been restoring the monastery and new statues have been ordered in New Delhi, India.

This monastery shows a real archaeological unity. The style is generally Chinese, with Mongolian and Tibetan influences. The place is symmetrical and the main buildings follow each other along a North-South axis ; the other buildings are located on parallel lateral axis.

Today you can see 28 constructions, notably a two-storeyed temple covering an area of 32 square metres (344 square feet) and open for the ceremonies. This remarkable 300-years old construction proudly stands. 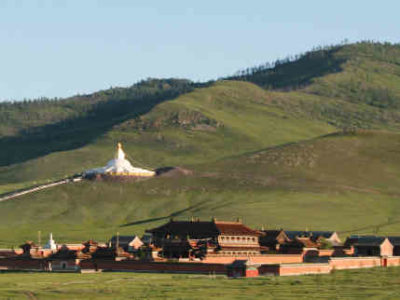 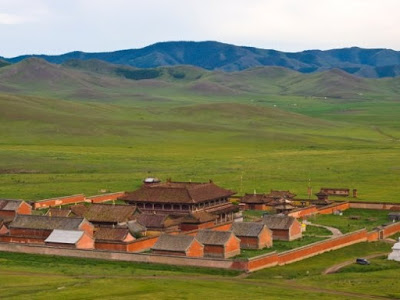 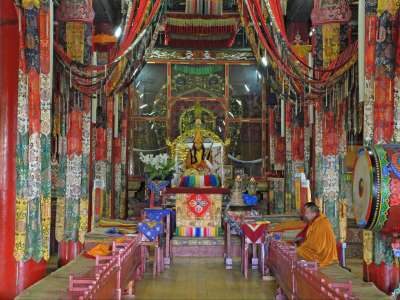