With a vast territory and a rich history, Mongolia offers so much to see and explore. We have listed for you the top attractions or must-visit attractions in Mongolia. 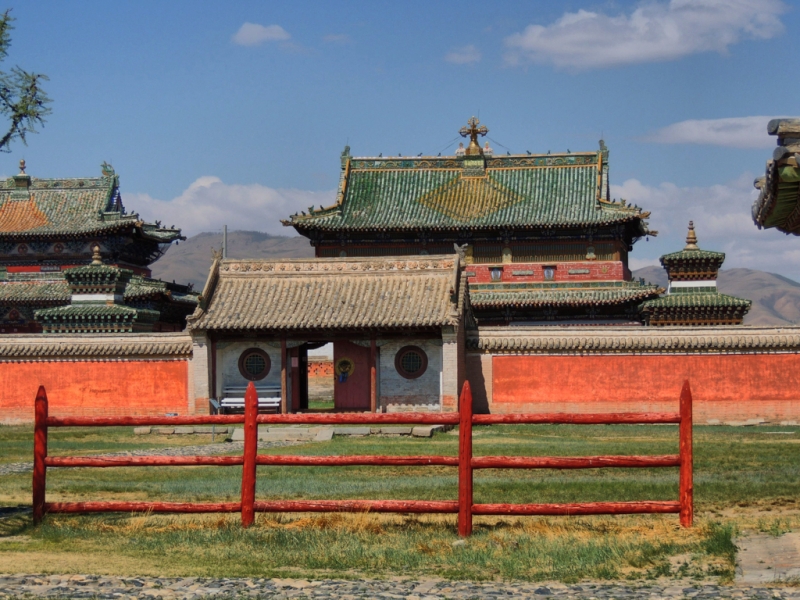 Erdenezuu Monastery in Kharkhorin town
Located north west of the imperial site of Kharkhorum, this monastery was built on the site of the ruins of the ancient Mongol capital. It was the first great Buddhist monastery of Northern Mongolia, and for centuries one of it’s most important. In it’s time, it rivalleed Urga as the the main center of Buddhism. At the present, 108 stupas are surrounding the monastery. It’s 400 metres by 400 metres and each stupa was erected in commemoration of a particular event, related in the inscriptions on each one.
Erdenezuu and the vagaries of history: The construction of ERdenezuu began in the 16th century and continued until the middle of the 19th century. The temple have been built in a mixed styles which are Mongol style, Chinese and Tibetian style. The temples often suffered fire or attack over the years. In 1731, they were violently attacked by the western Mongols and between 1760 and 1814, they were restored several times. 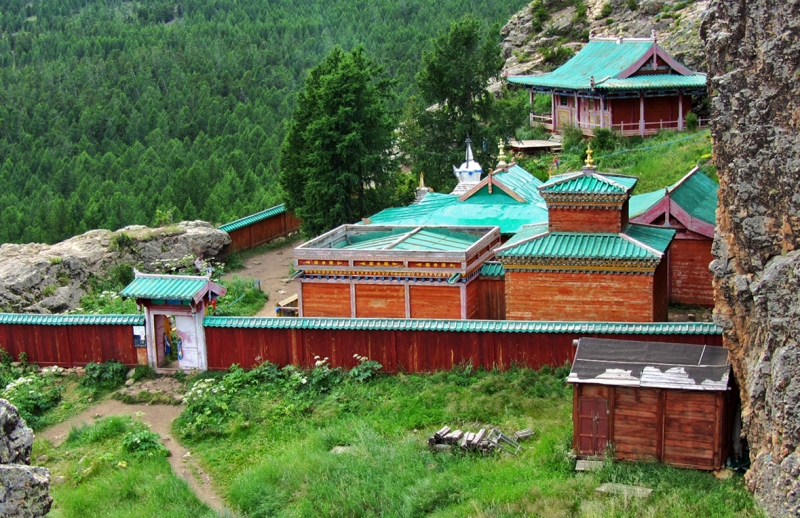 Tovkhon khiid
The excellent location of TOVKHON KHIID was selected by Ondor Gegeen Zanabazar on this 19th birthday. It was in 1653 and he named it ‘’Land of Happy Solitude’’ the hermitage of Tovkhon is 68 kilometres from ErdeneZuu, in the wooded Shiveer Ulaan Mountains of Bat-Olzii sum.
Not far from the summir of the mountain, on a first platform, are several temple halls, one of which is made from wood. To the west of these, having passed some large rocks, one can see footprint attributed to the first Bogd Gegeen, and a small cave (uran darkhani agui) where Zanabazar meditated. Climbing further up, one at rives, at a second platform from which a spring runs out. Another cave is located here- the Ekhiin Khevlii (Mother’s belly) which is just big enough to stand in although you have to crawl to enter it. This is a veritable regressus ad uterum to which the pilgrims appeal in the hope of having their faults washed away in the next rebirth. From there one can climb higher and reach the summit of the mountain where there is an ovoo and rock called the place of naadam.

The Mongolian government established the Great Gobi National Park in 1975 and the UNESCO designated as the Great Gobi as the fourth largest Biosphere Reserve in the world in 1991. Mongolians consider that there are 33 different Gobi , where sandy desert occupies only 3 percent of the total territory. The area is often imagined as a lifeless desert like in many other parts of the world. Gobi Desert is a land of dinosaurs and it is the home for camel breeders rich with wildlife and vegetation. Dinosaur skeletons and their petrified eggs have been preserved here to the present day. Wild asses, camels, snow leopards, mountain sheep and gazelles flourish here, as do different types of flora. Some highlights are the picturesque gorge of Eagle valley, towering sand dunes; Khongor, Moltsog Els and Bayanzag flaming cliffs; the sites of numerous important dinosaur fossil discoveries. 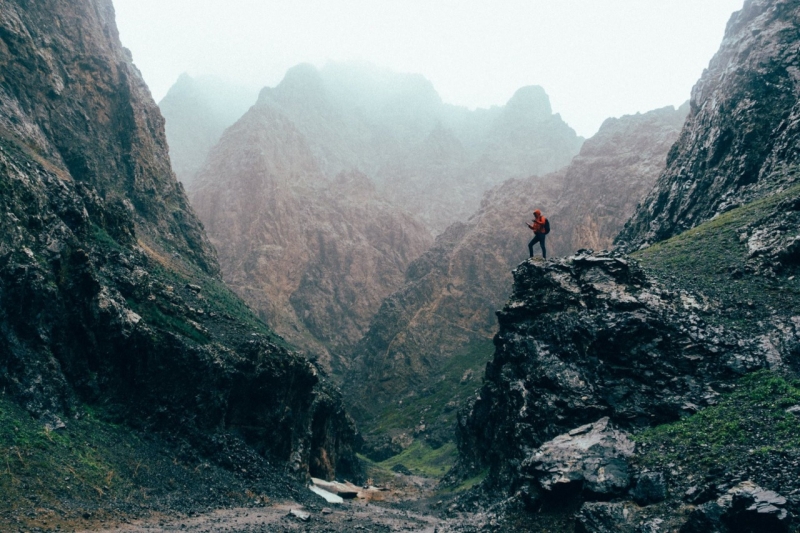 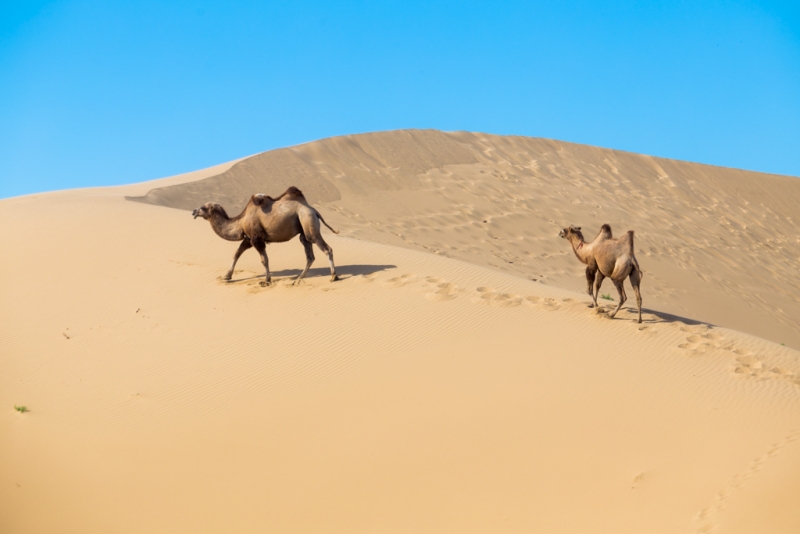 This is a Mongolian largest sand dune reaching a height of 800 meter in some highest areas. The sand dunes in Sevrei sum, South Gobi aimag, are called Khongoryn Els. These dunes are 20 km wide and 100 km long. The Khongoryn River flows along the sand dunes and gives birth to oases. The sand dune change the color with each hour of one day, from yellow to silver to rise colored at dawn / sundown. This dune is considered one of the biggest dunes with it is length of 180 km and width of 3-5 km. The dunes make sound like plane engine in a windy day so it has been named as "Singing Dunes". 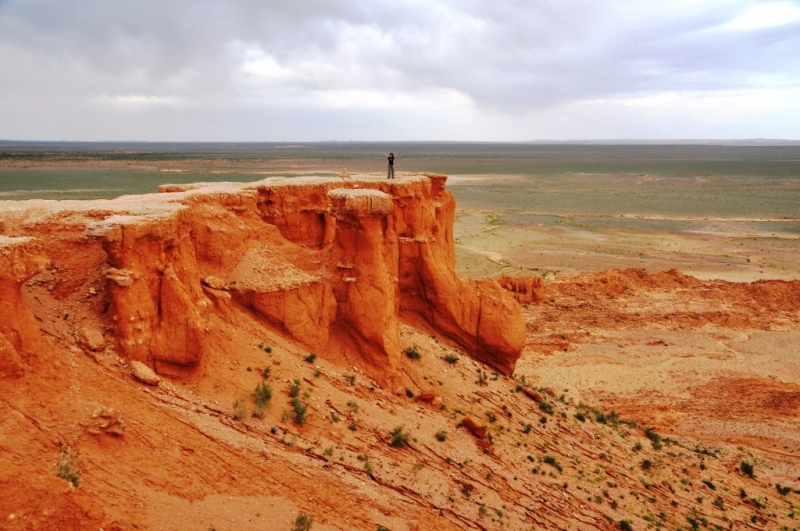 One of the famous places is Bayanzag, bottom of Ancient Sea which excited 60-70 million years ago where a lot of Palentological findings have been discovered. The place is known as Flaming Cliffs so named by Roy Andrew Chapman American explorer, who had visited Mongolia in 1920. During the 2 years he searched through the Mongolian Gobi Desert & he found dinosaur fossils from Bayanzag, Nemekht. He brought his palentological findings on 70 camels. Chapman presented Mongolia one large skeleton on show in the Ulaanbaatar Natural History Museum. He found 10 kinds of dinosaurs 8 were found from Mongolia . Also South Gobi has an oasis and most beautiful mountains Nemegt, Altan mountains and wide steppes and valleys with exotic wild animals like Asian wild ass, black tailed gazelle, and steppe wolf. The Gobi bears which very rare animal can be seen in this area. This is one most beautiful place among the 33 Gobies of Mongolia where travelers can see pre-historical rock paintings, caves where monks have made meditations and ruins of ancient temples and villages.

The Monastery is one of the four leading important monasteries of Mongolia. The construction of the monastery temples, towers and other buildings, completed in 1737, represents the creative work and great craftsmanship of that period of time. 10 of the 37 temples were completely destroyed. The restoration of the monastery has recently almost been completed with the aid and assistance of UNESCO." 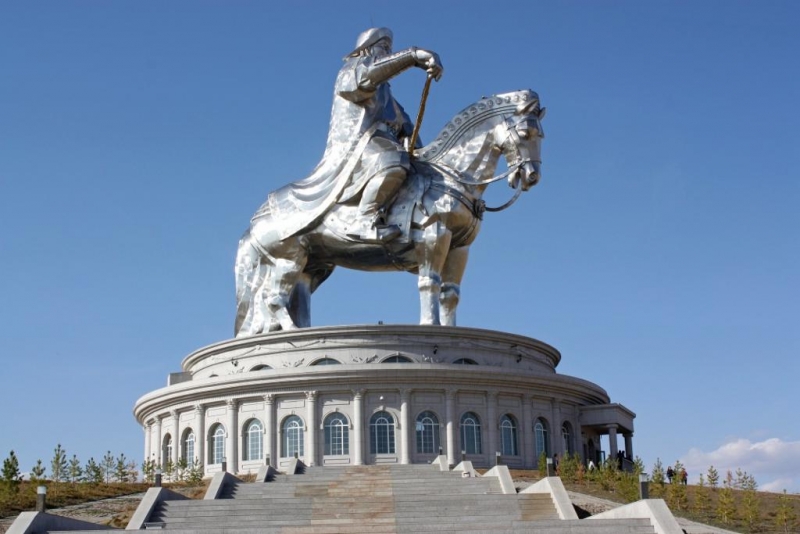 Genghis Khan Statue Complex is currently the biggest (40m high) equestrian statue in the world. It is connected with Ulaanbaatar by a paved road with 54km.There is a recreation area, restaurants, and souvenir shops occupy the base structure. From here, visitors use an elevator or walk to the head of the horse through chest and back neck of the horse, where they can have farseeing and good panorama view over the complex area.The equestrian statue of Genghis Khan was built in 2008 on the occasion of the eight-hundredth anniversary of the foundation of the Mongolian Empire, in honour of its founder, Genghis Khan.