Naiman Nuur National Park is located in the province of Ovorkhangai, in the Khangai range, and it has the typical landscapes of the Mongolian high mountains with their large forests of larches.

The area of Naiman Nuur, ”Eight lakes”, formed behind the volcanic eruptions that occurred all along the centuries. The park is 2400 metres (1,5 mile) above the sea level. An area of 11.500 hectares has been protected as a National Park since 1992.

The lakes are located about 35 kilometres (22 miles) Southeast Orkhon waterfalls, but the track is impassable. This way is accessible only to hikers and horsemen/women who will enjoy an exceptional nature, whereas the jeeps will have to skirt round the mountains by Bat Ulzii (130 kilometres, 81 miles), or even by the track to Khujirt (260 kilometres, 162 miles) in case of heavy rain.

The eight lakes in question are lakes Shireet, the largest and the most beautiful, Khaliut, Bugat, Khaya, Khuis, Onon, Doroo and Bayan Uul. Two of the smallest lakes are completely dry, and the second largest lake, Khuis Nuur, is 90% dry.

The national park is located in a high mountains area comprising alpine meadows and forests of conifers (Siberian pines and Siberian larches). In the North of the protected area, we can see entire valleys strewn with volcanic stones. The peaks of the mountains are arid.

The place is very cool and there can be snowstorms in June or August. In the heart of Summer, temperatures rarely go until 20°C during the day. 400 to 500 millimetres (16 – 32 inches) of rain fall each year.

Inside the national park, we can see 50 species of birds, such as the black-throated loon, great cormorant, bar-headed goose, or whooper swan. 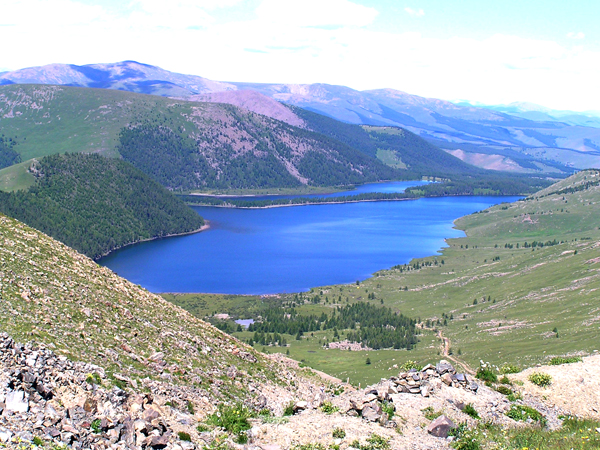